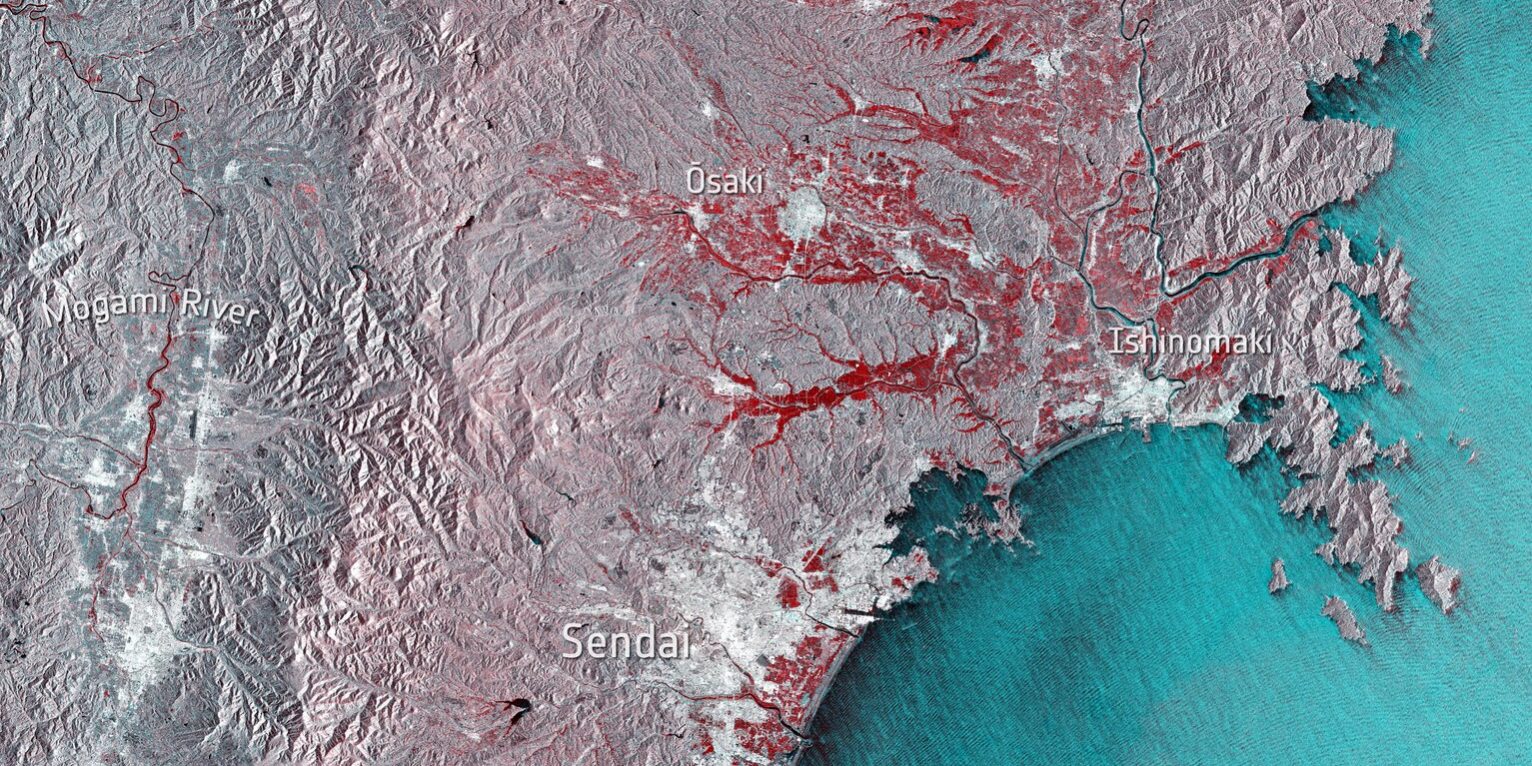 Even just within the last couple of months, Cyclones Fani, Idai and Kenneth have brought devastation to millions. With the frequency and severity of extreme weather like this expected to increase against the backdrop of climate change, it is more important than ever to forecast and track events accurately. And, an ESA satellite is helping with the task in hand.

Hagibis was the biggest typhoon to hit Japan in decades. With extreme events like this likely to increase in number and in severity as a consequence of climate change, satellites are playing an increasingly important role in understanding and tracking huge storms.

Different satellites carry different instruments that can provide a wealth of complementary information to understand and to respond to a single event.

The Copernicus Sentinel-1 mission carries an advanced radar instrument to provide an all-weather, day-and-night supply of imagery of Earth’s surface. Its ability to ‘see’ through cloud and rain and in pitch darkness makes it particularly useful to measure the ocean surface wind speed of tropical cyclones.

As the radar signal penetrates the clouds, the pattern created by the cyclone on the sea surface – known as the ‘roughness’ – can be characterised. This allows the ocean surface wind speed to be calculated. This is possible thanks to the Sentinel-1 image dual polarization combination.

The high resolution of Sentinel-1 provides an unprecedented detailed insight of the cyclone inner core structure, in particular the eye’s diameter, the radius of maximum winds and the maximum wind speed.

These data are valuable for the Satellite Hurricane Observation Campaign (SHOC), which collect satellite observations to provide a synoptic view of hurricane development and evolution. SHOC involves CLS (Collecte Localisation Satellites), IFREMER (French Research Institute for Exploitation of the Sea) and Météo-France.

Alexis Mouche from IFREMER states, “The synthetic aperture radar is the only sensor that can characterise extreme winds, greater than 70 m/s, at a high resolution. These measurements complement existing data, helping scientists to better understand the physical mechanisms of these phenomena.

“This could also lead to a more accurate analysis of tropical cyclones, particularly their ocean surface wind direction and intensity, and can therefore open possibilities in improving hurricane forecasting.”

As well as this, images from before and after a flood offer information on the extent of inundation and can be used to help authorities to assess damage to infrastructure and environment. The Copernicus Sentinel-1 image shows the extent of flooding in red near the cities of Sendai and Ishinomaki on 12 October.

Although originally intended to measure soil moisture and ocean salinity, ESA’s Soil Moisture and Ocean Salinity (SMOS) mission can estimate the wind speed at the sea surface under tropical cyclones.

The satellite carries a novel microwave sensor to capture images of ‘brightness temperature’. These images correspond to radiation emitted from Earth’s surface, which are usually used to collect information on soil moisture and ocean salinity.

Strong winds over oceans whip up waves, which in turn affect the microwave radiation from the surface. This means that although strong storms make it difficult to measure salinity, the changes in radiation can be linked to the strength of the wind over the sea.

While Sentinel-1 provides high resolution information over limited areas, SMOS offers the advantage of a very wide swath providing regular coverage of the entire ocean. These different data complement each other.

John Knaff, from the NOAA Center for Satellite Applications and Research, says, “Wind field estimates of tropical storms, such as Typhoon Hagibis, are extremely difficult to produce. Over the last few years, satellite observations have become extremely valuable as they are able to estimate surface winds of cyclones.”

“As track and intensity forecasting errors have become fewer, accurate estimates of the extent and structure of tropical wind field is becoming a higher priority in the tropical cyclone forecasting process. These new capabilities such as wind speed estimates from satellite data are becoming more available to operations, and allow for finer-scale temporal and spatial estimates of tropical cyclone surface wind structures.”

Nicolas Reul, a scientist at IFREMER says, “The complementing measurements we get from Sentinel-1 and SMOS provide an unprecedented source of information about the surface wind speed structure from the eyewall to the outer core of the high wind region of tropical cyclones. This will help us to better understand the physical mechanisms of these phenomena, and already improves hurricane forecast and warning systems.”

The typhoon also triggered an activation on the International Charter Space and Major Disasters, by the Asian Disaster Reduction Center. Using observations from several satellites, the service provides information for emergency response and provides on-demand mapping to help civil protection authorities and the international humanitarian community in the face of major emergencies. In this case, Copernicus Sentinel-1 was used within the activation.

Soon to celebrate 10 years in orbit, SMOS was built to measure soil moisture and ocean salinity to better understand the water cycle. While science benefits from its measurements, the SMOS portfolio is being expanded to help with some everyday applications that include monitoring and improving forecasting of large storms.

The problem with observing hurricanes and cyclones from space is that satellite’s carrying camera-like instruments cannot see through masses of thick spinning cloud to measure wind speeds.

Traditionally, satellite scatterometer instruments have been the main source of information to measure wind speed over ocean waters, but SMOS can offer additional information when storms are severe.

SMOS carries a microwave radiometer to capture images of brightness temperature. Measurements correspond to radiation emitted from Earth’s surface, which are then used to derive information on soil moisture and ocean salinity.

Strong winds over oceans whip up waves and whitecaps, which, in turn, affect the microwave emission from the surface. This means that the changes in radiation can be linked directly to the strength of the wind over the sea.

Nicolas Reul, from Ifremer, said ”While advances in our understanding of the physics underpinning the life cycle of tropical storms and their development into hurricanes and cyclones is advancing all the time, there is no substitute for improved measurement capability that can help define the character of a given storm.

“Although SMOS data have a spatial resolution of 40 km, the wide-swath regular repeat coverage and ability to provide measurements of surface-wind speed structure at hurricane force in the presence of heavy precipitation is unique.”

The fact that SMOS can be used to estimate ocean-surface wind speeds in extreme weather has been known for a while – but as highlighted at this week’s Living Planet Symposium, this is being put into practice.

Experiments show that SMOS can, for example, help improve errors in forecast lead times by 36–72 hours in the extratropics.

Since September 2018, the services has been ‘pre-operational’, providing data to selected users such as the NOAA National Hurricane Center, the U.S.  Naval Research Laboratory and the Joint Typhoon Warning Centre who are assessing the potential benefits.

The importance of this goes beyond the SMOS mission as the continuity of these kind of measurements is now being studied within the context of one of six a potential future Copernicus missions.

ESA’s Craig Donlon, explains, “The Copernicus Imaging Microwave Radiometer concept is a global coverage mission, but with a focus on the rapidly changing Arctic region, where both high winds and salinity play a major role in the ocean system.

“There is no doubt that SMOS has allowed us to explore and further develop the enormous potential of L-band microwave radiometer measurements for the ocean.”