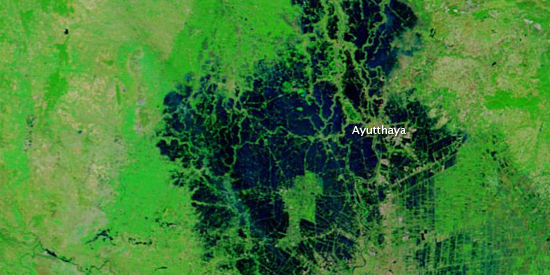 A first of its kind study by researchers at the NASA Goddard Space Flight Center in Greenbelt, Maryland, calculated the Value of Information (VOI) for the near real-time satellite data available during a disaster. The team used MODIS data and QGIS to create water extent maps for a 2011 flood in Thailand. The results allowed researchers to analyze paths from ambulance houses and fire stations to areas of distress. The research found that routes from dispatch sites to their destinations often intersected areas of flooding deep enough to disable the average passenger car. This caused delays and reroutes for emergency vehicles. Response times were, on average, nine minutes faster using routes created with the information available from MODIS data, as compared to the baseline response times during the disaster.

In their research the team pointed out that during a disaster, time costs lives; and using VOI methodology time costs money as well. The researchers were able to use the open source, near real-time information to create faster response, but also create estimates of thecost of the floods, calculated in dollars per square meter. Both the lives saved and knowledge of the costliest areas hit provides useful information for disaster response stakeholders. Emergency managers need to make decisions about assessing damage, prioritizing resources, future planning for disaster resilience, the information available from satellites makes these decisions easier and more cost effective. The socioeconomic savings from this knowledge, NASA says, is in the millions of dollars annually.

The team used free MODIS data and open-source QGIS to highlight that these savings come at no cost to disaster responders. Instead, the methodology has been published and the data is available to download – often within hours of the disaster. “It has a lot of value for planning future response scenarios, allowing us to move from data to decision-making” says John Bolten, associate program manager at NASA Earth Science Water Resource Program.