How satellites can help put out fires – or even prevent them 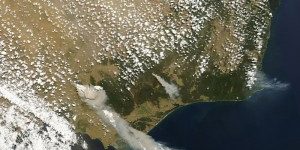 The Australian landscape has been shaped and impacted by bushfires for tens of thousands of years, with some of the natural flora and fauna even evolving to become reliant on them. But Australia is also no stranger to the destruction and devastation they can cause.

Over the last 50 years or so, Australia’s climate has been experiencing more and more bushfire weather, and we will likely continue to see an increase in the number of ‘very high’ and ‘extreme’ fire danger rating days over the coming years.

In the past, we could only rely on ground intelligence and communication to see where a fire was. But with satellite technology, we are now able to fight fires like never before, with the potential to prevent or mitigate disasters and save lives through early bushfire detection, fire-spread modelling, thermal imaging, moisture content monitoring, and even live streaming of satellite images.

From Earth observation to inspiring action

LANDSAT 1 operated until January 1978, outliving its design life by five years. The quality and impact of the resulting information exceeded all expectations. Credit: NASA.

Using satellites to monitor fires and provide fire data has been possible since 1972. That’s because in 1972, the first Earth-observing satellite ever was launched from the U.S. It was initially called the Earth Resources Technological Satellite and later renamed LANDSAT 1.

Although satellites weren’t initially launched for firefighting reasons, this became a beneficial byproduct of satellites meant for monitoring the land on Earth.

But in those early days all LANDSAT 1 could do was survey the damage that the fires had caused.

As satellites improved, so too did their capabilities and usefulness regarding fires.

In 1976, the US created the Defence Meteorological Satellite Program, which allowed us to detect fires at night; and in 1981, NASA launched the Geostationary Operational Environmental Satellite (GOES) Network, in which satellites were able to monitor active fires.

Such advancements in satellite technology around the world have proven to be useful for Australia, too. During the Black Saturday bushfires in 2009, for example, satellite surveillance was used to keep track of where the fires were burning and how severely, which allowed fire authorities to fight them more effectively.

This surveillance was performed by satellites belonging to the China National Space Administration (CNSA), China’s national space agency, thanks to an agreement between the two nations that China’s satellites be used to monitor Australia when available. The high-definition imagery was sent from the satellites to experts at the University of New South Wales and then to the Country Fire Authority within 30 minutes — and the ability for quick turnarounds are imperative during a bushfire.

A satellite image taken by MODIS Aqua satellite on 7 February 2009 of smoke plumes from the Black Saturday bushfires. Credit: NASA.

Australia receives further assistance from the Japanese satellite, the Himawari 8, due to its geostationary position above the Australia/Asia region. It has been in space since 2014 and provides detailed imagery of the world below.

You can see the daily mapping of all the bushfires around Australia that Himawari 8 provides here: https://sentinel.ga.gov.au/#/

In addition, NASA’s pair of MODIS (Moderate Resolution Imaging Spectroradiometer) instruments which orbits the Earth on the satellites Terra (launched in 1999) and Aqua (launched in 2002). MODIS is able to provide visual data of Australia and has been a useful aid for Australian fire prevention as well as research.

Australian scientists are starting to use NASA’s data to calculate the frequency of bushfires in Australia and are even beginning to use modelling to predict the likelihood of fires starting in any Australian location during bushfire seasons.

The potential for a worldwide response

This animation of FireSat shows how the constellation of satellites with thermal infrared imaging sensors would locate wildfires. Credits: Quadra Pi R2E.

The dangers of bushfires are experienced around the world – so in 2011, NASA’s Jet Propulsion Laboratory developed a global solution. They’ve called it FireSat which will be a network of over 200 satellites, each equipped with infrared sensors that will be able to quickly locate wildfires anywhere in the world as long as they are at least 10 metres wide.

Along with spotting them, they’ll be able to quickly contact emergency services in the relevant area. This aims to address the current issue of fires not being detected early enough and dangerously escalating.

“The system we envision will work day and night for fires anywhere in the world,” said Robert Staehle, the lead designer of FireSat at JPL. They aim to launch them this year.

Fighting fire at home – with CubeSats

While Australia has benefitted greatly from American and Asian satellites, foreign satellites may not always be available or accessible for monitoring the Australian landscape – so it’s important for Australia to develop their own satellites for fire prevention.

This led to a hot idea by three UNSW students named Siddharth Doshi, Himmat Panag and David Lam, which was unveiled at the 2016 Mission Idea Contest held in Bulgaria.

The trio proposed having a constellation of 12 CubeSats to monitor fire-prone areas of Australia. They will use thermal imaging to detect any fires in a quicker and more spatially-precise way than what weather satellites like Himawari 8 currently do.

“We came up with project after speaking to fire analysts at Queensland and ACT emergency services,” said Siddharth to UNSW Engineering. “A system which can be used to detect small fires before they spread and monitor with a quick revisit time between images. We realised that technology had advanced to the point that this was now feasible.”

In conjunction with the CubeSats, there would also be a collection of about 10 ground stations where the satellites’ images will be sent. The data would be made available to the public as well as being sent to fire agencies, who would gain important information about fires’ location and direction.

Their idea won the contest, and it was a great opportunity for the team to gain visibility and recognition for a project that could have substantial and meaningful impact if implemented.

Those who have experienced the devastation of bushfires are likely to never forget it. The Black Saturday bushfires remind us of the importance of mitigating such disasters, if and wherever possible. But perhaps some hope can be found in the knowledge that when you look up: many satellites are looking down on you, capable of aiding and perhaps, one day, effectively preventing such disasters in the future.