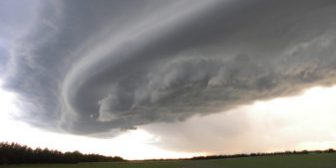 After substantial investments to build and launch sensors designed to observe the atmosphere, numerical weather and climate prediction have benefited greatly from the assimilation of satellite data.  The overall improvement in forecasts include advances in modeling, computer power and observations. Satellite observations have also enabled fantastic advances in situational awareness for forecasters. Combined with modern model guidance and the expertise of the operational forecasters, we’ve made great strides in saving lives, protecting property and enhancing our economy. It therefore seems counterintuitive that only 3-5 percent of satellite observations are actually used in preparing numerical weather forecasts.  Machine learning  and other artificial intelligence  techniques could help forecasters get more out of these data by improving accuracy and speed in almost every step of turning satellite observations into actionable forecasts.

Why don’t we use all the data now? First, there are strict time limits for completing weather forecasts and the computer power requirements to process the ever-increasing volume of satellite data are prohibitive within those constraints. Second, there are significant scientific challenges to properly interpret and exploit the most interesting and potentially most valuable satellite data—these are the satellite data in stormy situations where rain or complex cloud conditions are common. However, overcoming these obstacles will very likely lead to more accurate weather forecasts—including forecasts of extreme events such as hurricanes and tropical storms.

How can AI can help exploit satellite data? Let’s start with the complicated numerical weather prediction applications (NWP apps for short) that work together to produce almost all weather forecasts longer than a few hours. One of the most important apps mixes all kinds of data to make a full picture of  current weather conditions. Temperature, wind, and humidity data from all around the are put together in what we call data assimilation, or DA for short. The data include observations and six-hour forecasts, but none of these data are perfect—they all have errors. During DA, data with small errors are given higher weighting than data with large errors. An accurate DA analysis is critical for an accurate forecast. To get the most out of the observations collected, scientists need to give the DA app a perfect understanding of the data errors. Scientists also need to leverage all environmental observations to maximize both spatial and temporal coverages to avoid gaps. The DA app isn’t perfect as scientists use different short cuts to make it work, such as using only some of the observations (to “thin” the observations), or combining observations close together into what are called “superobservations”. These considerations along with the large computational cost of the DA for the huge volume of satellite observations explain why so few satellite observations are actually used.

AI and machine learning techniques have advanced considerably across areas as diverse as medicine, self-driving cars, social media and the finance industry. Meteorology and oceanography have also seen its share of AI advances. However, until recently, far fewer AI applications were developed for exploitation of environmental satellite data, high-level information extraction in the area of mumerical weather prediction, data assimilation and forecasting, as well as for extreme weather prediction and nowcasting. There have been encouraging signs that AI is increasingly considered for these applications, with promising results—including predictive skills—and this trend is expected to continue with the ever-increasing volume of satellite data and the increased societal reliance on improved forecasting accuracy. The increased data volume comes from higher resolution satellites and sensors, from a growing list of new sensors and from an explosion of new virtual observing systems made possible by the Internet of Things. Exploiting all these data sources is expected to present major challenges. AI is a potentially transformational technology, especially because of the potential of what might be called meta-Transfer Learning—the transfer of knowledge and expertise from fields in which AI has been firmly established to NWP and related environmental sciences.

Sid-Ahmed Boukabara is the acting deputy director of the NOAA NESDIS Center for Satellite Applications and Research.

The 1st NOAA Workshop on Leveraging AI in the Exploitation of Satellite Earth Observations & Numerical Weather Prediction will be held April 23–25 in College Park, Maryland. The workshop is intended for scientists, program managers, and leaders  interested in identifying innovative ways to use satellite and other environmental data. Details: https://www.star.nesdis.noaa.gov/star/meeting_2019AIWorkshop.php